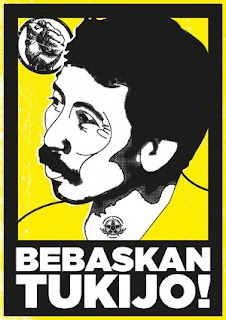 After 12 days of hunger strike, PPLP-KP and Sekber Invade Council Building.
Yogya (KRjogja.com)- After 12 days on hunger strike without getting any response, Kulon Progo Shoreline Farmers Association (PPLP-KP) and Sekolah Bersama (Sekber) organised a demonstration on Monday (3/10). They were demanding that members of the Yogyakarta Special Region People's Representative Council (DPRD DIY) should make their position clear. The crowds occupied the council building for several hours, until finally the head of the council, Youke Indra Agung, came out to meet them.

At the action, the General Action Co-ordinator Imam Mas'ud explained that the hunger strike that had been taking place was an attempt to object to PT Jogja Magasa Iron's presence in the area, the company which is carrying out a project to mine iron sand in Kulon Progo. But until now there has been no response from anyone, despite the actions that have been carried out.

“Until now there are five people who have ended up in a critical condition because they have been on hunger strike. Five others are continuing the action. But there has still not been any response or resolution that can clarify what is happening with the iron sands project. Even the Regency leader only came by to show he was sympathetic, but without giving any concrete answers”, he exclaimed.

He related that the lack of a response to the hunger strike indicated that neither the government nor the council members cared. The farmers warned that they would keep taking action until there was a definite decision to reject iron sand mining on the Kulon Progo coast.

“The DPRD, as a institution of democratically elected people's representatives, should fundamentally be our main safeguard, by means of which the rights of the people can be clearly expressed. They should pay attention to the fate of the Kulon Progo people, which includes trying to ensure the freedom of Tukijo, a coastal farmer who is currently in prison.” he said.

The chair of the DPRD DIY, Youke Indra Agung, took the opportunity to announce that the problems around iron sand mining in Kulon Progo were taking place because of permissions granted by the central government and not any agreements made by the provincial council. Decisions about the mine did not come from discussions in the council and the matter lay outside the DPRD DIY's authority.

“According to information from the Kulon Progo Regency Government and the Provincial Government, the iron sands present will bring positive impacts to the Kulon Progo people. If it so happens that problems occur which are outside what is communicated to the council by the regional government, we will then take that to the government. We will co-ordinate first of all and can't take action directly because that is the government's prerogative,” he explained. 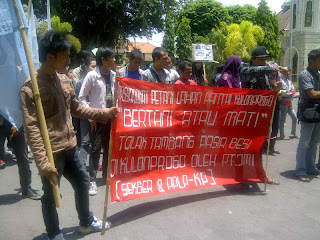 Tukijo is still in prison! A farmer on the Kulon Progo coast, he was arrested on the first of May 2011 as he was working in his fields. A vehicle with nine cops showed up, who said they wanted to talk to him but then forced him to go with them. He was barefoot at the time. He has been kept inside ever since and has now been sentenced to three years in prison.

The accusation against Tukijo is that he held hostage seven of PT JMI (Indo Mines) workers. These workers had been peaceably advised by local people that for their own safety they should not use a path that had previously been agreed that it was not for use by the mining company's employees because it was within the conflict area. However, they had deliberately and repeatedly broken this agreement and it was important to remind them so that riots didn't occurs. It looks like PT JMI have seized this opportunity to deprive the coastal people of their freedom and human rights, using state forces, twisting facts and abducting community members.

An account of Tukijo's arrest in May in English, written by PPLP-KP, can be found at: http://pplp.0fees.net/2011/05/about-the-kidnapping-of-tukidjo-by-the-kulon-progo-police-indonesia/