At the second sitting of Hidayat's trial, on 16th April 2012, the court decided to set him free after taking into account the time he had already spent inside. The hearing, which started late and continued for almost one hour, was attended by his friends, lover and his mother.

Hidayat, who had been charged with article 170 of the Indonesian penal code, was sentenced to the time he had already served and set free after consideration of his need to continue his studies, as well as his health, which had been deteriorating in prison. After the defence presented its case orally, the judge rapped his gavel to declare his judgement. Hidayat's mother burst into tears after hearing the decision

The editors of Kokemi blog hope that the fire that burns in our hearts is not dampened by the fear of the Wanted Persons List and the threat of prison - many of our comrades are still in prison and solidarity will continue as long as is necessary, until the prisons lie in ruins.

We are asking for donations and solidarity for a member of our community.

As many of you know Billy Anjing was detained last year by the police for a political action. He is still being held and is currently on trial. 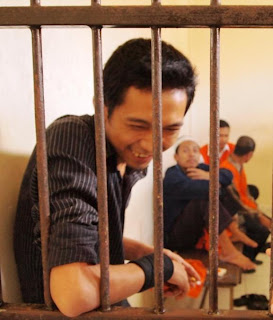 Last June Billy was in a motor accident. He was admitted to the hospital with a fractured skull and concussion. He left the hospital after 3 days because of misdiagnosis and poor medical treatment. After leaving the hospital he saw a specialist who stated he appeared to be alright but to IMMEDIATELY seek medical attention from a specialist if he was to have any symptoms or pain later.

For 2-3 weeks now, Billy has complained of frequent and severe headaches. He is also experiencing blurred vision and extreme pressure build-up, and his neck loses circulation (kesemutan) from time to time. Due to these symptoms he’s having great difficulty sleeping, writing, reading and seeing, and they seem to be getting rapidly worse as time goes by.