A Wave of Protest Against Police Brutality Echoes in Many Cities.

A wave of protest against the police brutality that resulted in several deaths in Sape, Bima, West Nusa Tenggara has been emerging in several cities over the past few days. These actions are in solidarity with those involved in events which have taken place across Indonesia, and in Bima in particular.

The occupation of Sape port by thousands of residents of Lambu district, Bima regency, West Nusa Tenggara has been repressed and forcibly dispersed by the police. The action, which had continued for five days, was being carried out by local people in opposition to the operations of PT Sumber Mineral Nusantara.

The forced dispersal started in the night and continued into the early morning of Friday 24th December 2011. Information suggests that hundreds of people were wounded as a result of the clash, eight people are dead and ten people have been arrested by the police. Most of the people who were attacked ran away towards the mountain and many are still in hiding.

64 young people were arrested at a punk concert in Banda Aceh on Saturday December 11th. A few days later they were taken to a police training school, where their hair was ritually shaved, their clothes and possessions were taken from them, they were forced to pray, and the Acehnese authorities stated that they would be held for 10 days for 're-education'. Actions in support of the punks have taken place across Indonesia but also around the world as punk communities have responded to the news, after mainstream media outlets broadcast pictures of the mass detention.

Bringing Papua's Problems to the Streets of Makassar

On December 10th, an action was organised in Makassar to commemorate International Human Rights Day, an appropriate moment to highlight the violence, state and corporate aggression and the discrimination faced by Papuans. A giant banner 7 metres x 4 metres was unfurled across a banner. Very many people took notice of this action, both because of the size of the banner, and also because the Papuan issue has lately become extremely sensitive in Indonesia.

The conflict in West Papua has intensified greatly in the last half-year. In the few days following the solidarity action in Makassar, news has emerged of a major military offensive in Paniai region where 26 villages have been razed and the inhabitants of 130 more have been forcibly evicted or have fled (see West Papua Media Alerts report). Papuan resistance movements also continue to grow and consolidate, but full information about the situation often does not penetrate the rest of Indonesia, and acts of solidarity are not so common. Below is the contents of the leaflet which the group JEJAK prepared for the action. 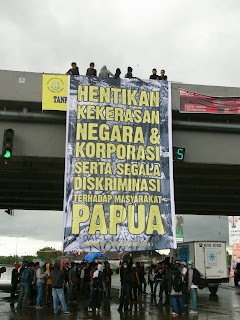 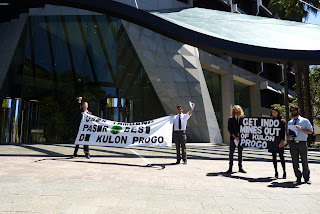