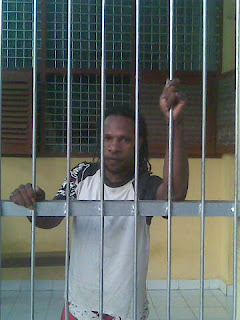 An expression of people's desire for freedom, cries of “Papua Merdeka” continue to ring out through the cities, mountains and forests of West Papua. The struggle is against fifty years of Indonesian rule, which throughout the last half-century has violently tried to subdue Papua, in its attempts to create a unified nation from the 17,000 islands that once made up the Dutch Empire.

Freedom as expressed by the word 'merdeka' is primarily a call for political independence, although the word is imbued with the clear hope that a new national sovereignty would also bring a wider liberation. Even when used outside the context of nations, 'merdeka' carries a sense of autonomy or self-reliance; from the same Sanskrit root Indonesian also inherited the word mahardika, meaning wisdom or nobility.

Those cries of freedom are also heard from the cells of Papua's prisons, where its absence is arguably felt more strongly than anywhere else. The struggle for a national liberation suddenly becomes much more personal and immediate when deprived of your own individual liberty, by means of police handcuffs or a judge's order.

Prison is used as a weapon against the people and their resistance to Indonesia, and over the years thousands of Papuans have found themselves locked away from the world behind prison bars. Many were arrested for expressing their aspirations for liberation, mostly relatively peacefully, but occasionally also for taking up arms. Others were merely unlucky enough to have been in the wrong place at the wrong time and got caught up in the structural violence of a justice system designed to spread intimidation throughout the entire population.
Read more »
Posted by kassan at 8:31 AM No comments:


... The world's not well behaved and there can be nothing more normal than confronting the oppression ...