A Growing Movement Against Plantations in West Papua 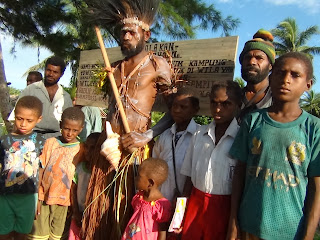 “We, the indigenous people of Yowied Village reject corporations coming on to our land in Tubang District for the following reasons:

there is not so much land around Yowied Village.

Our lives are dependent on what our environment can provide.

Where will the future generations go?”

The sign is tied with coconut leaves, a signal that it is a ‘sasih’ marker, a traditional means to forbid passage. Similar signs can be seen in almost all villages in the area. They are backed up by an agreement between all villages in the area that no-one should give up their land, under pain of death. It’s a desperate first act of defiance to a modern world they know has no place for them. A plantations mega-project has been imposed on Merauke, West Papua, and 2.5 million hectares of forest, grassland and swamps – the ancestral lands of the Malind people – are being targeted for oil palm, industrial timber and sugar cane.

For now, the natural ecosystem in remote Tubang District is still in good condition, and the Malind Woyu Maklew people who live in the area can easily find all they need from the forest by hunting, gathering and fishing. The former chief of Yowied village has claimed that he could easily live on only $2 a month, which he would use to buy tobacco and betel nut – everything else could be got from the forest.

Throughout Merauke Regency in the southern part of West Papua, a land controversially annexed by Indonesia 50 years ago, indigenous communities are having to learn fast how to resist corporate manipulations. In 2009 ambitious local politicians proposed Merauke as Indonesia’s new centre for industrialised agricultural growth. This was in the aftermath of the 2008 global food crisis, when governments worldwide got preoccupied about national food security, prompting a wave of land-grabbing globally. The Merauke Integrated Food and Energy Estate (MIFEE), as it became known, was officially launched three years ago in August 2010. Around 50 provisional permits have been issued to around 20 corporate groups, mostly from Indonesia or South Korea.
Read more »
Posted by kassan at 4:20 AM No comments:

'Jogja Not for Sale': not just looking for Haryadi 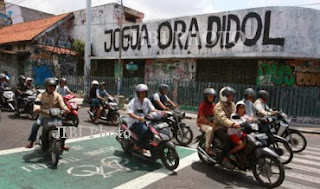 The commotion of Jogja's anniversary seemed not to have subsided, even though two days had passed. Not because it had been such a wild celebration, but because something had happened to stir up Jogja's street art community. Early on the morning of Wednesday 9th October 2013, an artist was dragged to the municipal guard's barracks because of painting a mural. Muhammad Arif was arrested for painting the words “Jogja Ora Didol”, meaning 'Jogja is not for sale' in the Javanese language.

Actually, this action was happening for the second - or third - time. The mural had first been painted on the actual anniversary of Jogjakarta, two days previously on the 7th October. However, before twenty-four hours had passed, the slogan “Jogja Ora Didol” had already disappeared, painted over by black paint, apparently by the municipal guards. Then the same phrase was painted over the black paint as a response. However Arif's action ran into trouble when a middle-aged man forced him to stop what he was doing. The man ordered Arif to come down from the wall he was standing on, but Arif didn't move. In the end Arif gave in as the man was pointing a pistol at him. Arif was brought by the man to the municipal guard's barracks to be interrogated and file an evidence report.

What Arif was actually doing - in theory - was part of the urban movement 'Looking for Haryiadi Festival', which had been conceived by various artists and collectives around Yogyakarta city. The Festival's Art Director, Agung Kurniawan, said that this movement had been sparked by concerns that city mayor Haryadi had absented himself from the task of reorganising public space, controlling visual pollution such as billboards, and other urban problems. There are also massive plans to build hotels, which mean evictions, and the uncontrolled growth in motor vehicles which causes traffic jams and increasingly takes space away from cyclists and pedestrians. As all these problems pile up around him, Haryadi has just chosen to travel abroad - the mayor's latest travels have taken him to Spain and the United States, who knows what for. In the end, it means thatYogyakarta is starting to become a less pleasant place to live.

But is it right to direct all the criticism only at Haryadi? Or is there also someone else involved who should also be facing accusations? I want to open up this possibility, that Haryadi is not the only one who should take the blame for the chaos in Yogyakarta's urban planning. Of course, if we see Haryadi as the administrative head of Yogyakarta City, he's the one who must be asked to take responsibility for any chaos in urban planning. He is also believed to be allowing visual pollution - such as corporate advertisements - affect buildings in a cultural conservation area. But actually, similar cases are not only happening in Yogyakarta City, but also other places around Yogyakarta Province. In Bantul for example, traders in Parangkusumo are threatened with eviction by a megatourism project which plans to develop the Parangtritis area. In Kulon Progo, coastal farmers are on the point of losing their farmland because of plans to develop an iron-sand mine. Hotel and other tourist development is also taking place in Sleman and Gunung Kidul districts.