Farmers' groups from throughout the island of Java came together last December to hear about each others struggles and share their experiences. Several of the groups are resisting different company's plans to mine iron sands along the whole southern coast of Java. Others have fought cement companies in Central Java and the mud volcano which has been erupting in East Java for five years since the Bakrie company started drilling for gas in the area. This was an important event, because the farmers involved are building their own networks, without the need for mediation by any NGO. 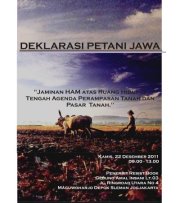 Update on the Two Imprisoned Combatants in Yogyakarta

We have received another piece of bad news about the case of the two social combatants which have been imprisoned in Yogyakarta since 7th October 2011. They are being held in connection to an arson attack in which the ATM machine of a capitalist network, the Bank Rakyat Indonesia (BRI), was burnt.

According to information that we've received, the police have extended their period of imprisonment up until the 5th January 2012, but the reality is the two are still inside and have not been released. This means that the two insurrectionists have now been locked behind prison bars for 93 days and counting.

Secondly, the likelihood is that they will be charged with criminal accusations which have a maximum sentence of nine years in prison. They are both charged under article 187 (clause 1 part E and clause 2 part E) and article 170 of the Indonesian criminal code.

It is likely that their trial will take place this month, January 2012. However we still don't know the date of their trial for sure. Because of this, we request help and solidarity in various forms from all who read this news.

Hidayat in Prison in Makassar after Demonstration

Makassar Police Headquarters have finally charged our comrade Hidayat, who is accused of damaging Police outposts during a demonstration supporting the people of Bima. According to the police, Hidayat's status has been changed to 'accused' because they have sufficiently strong evidence to justify this higher level. They also claim to have video and photo evidence.

Hidayat participated in a solidarity action that took place in Makassar on 26th December 2011 against the brutal police clearance of the anti-mining protest in Bima, where thousands of people had occupied Sape port. From what we have managed to find out, he was arrested secretively in the crowds between Jalan Gunung Bawakaraeng and Karebosi Link.