As the Indonesian Government made plans to reduce fuel subsidies, social resistance broke out across the archipelago, protesters fearing that the price rise would cause knock-on rises in the cost of living that would have a devastating effect on the poorest. The government has wanted to make this spending cut for several years now, but popular resistance over the years has made it very difficult to push it through. This time, however, they seem determined. One action in Medan, North Sumatra on the day the decision was taken was met with a brutal response from the police, where hundreds were injured and 87 people were arrested. Nearly three weeks later 32 people remain in police custody although it remains unclear whether they are actually being prosecuted. Neither their families nor lawyers have had any access to the people who are still arrested, most of whom were seriously hurt. Also, 17 more people, many well-known faces from the student movement, have been placed on the police wanted list as supposed intellectual masterminds of the action. Here’s the full chronology, from a participant: 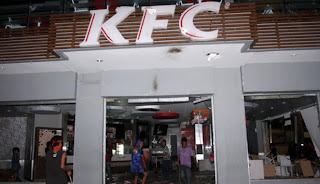