On the afternoon of Thursday the 21st of April 2011 we visited the Indonesian Embassy in London, UK to deliver a letter to the Indonesian Government in Jakarta. This was done in solidarity with the people of Kulon Progo, whose lives and land are threatened by the Iron Sands Mining Project being carried out by the Australian Mining Company PT Indomine and the Indonesian State. 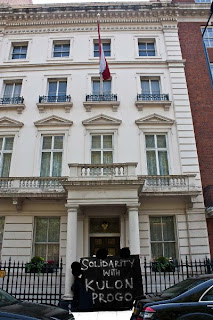 On the afternoon of Thursday the 21st of April 2011 we visited the Indonesian Embassy in London, UK to deliver a letter to the Indonesian Government in Jakarta. This was done in solidarity with the people of Kulon Progo, whose lives and land are threatened by the Iron Sands Mining Project being carried out by the Australian Mining Company PT Indomine and the Indonesian State. We also visited the London offices of the Anglo Pacific Group round the corner in Mayfair to deliver the same letter to be sent to Indonesia and Australia. Anglo Pacific Group holds royalties in PT Indomine.

The letter conveyed the demands of the local farmers and communities in the area that the mining project be immediately stopped. As they have recently explained: “At the local level, the source of conflict is the plan to mine iron sands, meaning that the cancellation of the project is the only way to achieve a peaceful solution to the matter… Whichever term is used: mediation, negotiation, compromise, win-win solution, we reject anything that is designed to result in the mining of iron sands.”

The military repression carried out, as part of the project, by the Indonesian state and security forces, along with the coercive methods utilized by national and local government, the foreign mining company, NGOs, businessmen and the like, were also denounced. The local people have been resisting this project since its inception. They have been fighting – both legally and physically – all the measures adopted by those that wish to impose this project. The continuation of the project would mean massive ecological and social destruction, and the displacement of local communities and at least 30,000 farmers from their traditional lands, with the resulting loss of farmland, food sources and income.

As they explained in February of this year: “Arising from government's reluctance to be open with the people, and the shortfall of communication when dealing with the people (it should be dialogue, not monologue), this conflict has sharpened and spread as those who have an interest in mining the people's land have carried out a series of excessive actions. The conflict has been triggered by government violence, whether physical violence (such as the clashes with the police that occurred on 20 October 2009), or violence which takes the form of the deception of the people through the engineering of law/policy. If the government permits or even nurtures this conflict, it is not impossible to imagine that the next step will be a massacre of the people by armed agents. If the government continues to impose its will, so we will fight the injustice, in whatever form that may take.”

Psychological and physical violence on the people, at the behest of the state and the mining company, continues. They ask for international support and solidarity to aid the struggle against the imposition of this project. It is still in its early stages and so support and expressions of solidarity of any kind is asked for and appreciated by the people of Kulon Progo.

Solidarity with the People of Kulon Progo. To Farm or to Die, Resist the Iron Mine!