News from the Social War in Sulawesi

In recent weeks several acts of uncompromising solidarity with people's struggles around the Indonesian State have taken place on the island of Sulawesi,, from one end to another, in the cities of Makassar and Manado. Here is a short chronology of some ignited passions:


On the 22nd March, several individuals armed with rocks destroyed the glass shopfront and door of the multinational fast-food restaurant on Jalan Perinitis Kemerdekaan, leaving behind a communique:
“For the exploitation in Bima (West Nusa Tenggara), for Kulon Progo, West Papua and other places. State and Capital will have to face our fury”
March 25, Makassar: Burning of BCA Bank ATM

from Tempo Interactive, Makassar : A BCA ATM located outside the University of East Indonesia (UIT), Jalan Rappocini, Makassar was set alight by unknown individuals. The arsonists, who identified themselves as the “Got is Tot Insurrectionary Front” left behind them a communique, filled with threats.

from inilah.com, Makassar: Whoever set fire to BCA's ATM on the University of Eastern Indonesia (UIT) on Jalan Rappocini Raya, on Friday (25/3/2011) left behind a sheet of paper with their message.
This paper, which was illustrated with a picture of a hand-grenade, bore the title:
“The State, Military Institutions and Police as well as Capitalists are the Real Terrorists”.
The document continued as follows:

“PT Indomining (Bima) has been brutally repressing the local population, Jogja Magasa Internasional wants to evict 30,000 farmers in Kulon Progo. Farmers in Takalar are facing the threat of land-grabbing. These actions are carried out in a brutal way, including shootings, terror, sexual harassment as well as the various forms of repression that we never hear about in the mainstream media.
That's not surprising because these capitalist-bureaucratic companies do not care about anything except making their wallet thicker!" (All the above was written in large capital letters).

“Our attacking of an ATM (bank) is an important target, because banks are always involved in financing natural resources and the repression of the people in the name of capital! We have no intention of injuring anyone, the destruction of property is not violence! No mercy for the forces of repression! No mercy for the State and Capitalism!”
April 4, MANADO burning of BCA bank ATM:

from beritamanado: The burning of one of BCAs ATM machines in Tanjung Batu caught the attention of all passers by and neighbours. The arson attack resulted the burning of a BCA ATM machine in Jalan Sam Ratulangi Wanea , on Tursday 4/4 around 01.30 Central Indonesian Time 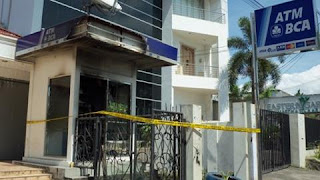 beritamanado's observations at the scene of the incident showed the machine and the room that housed it to be burnt, the glass was smashed, the air conditioning machine that was inside the room was also burnt. A CCTV camera was also burnt and its remains scattered over the floor.
Although everything seemed thoroughly burnt, the money store was only singed, as was the receiver from the back-up data of the CCTV recorder. This afternoon around 16.00 Central Indonesian time, bank workers and Manado Police had secured the receiver in the ATM room.
It is supposed that BCA's ATM was deliberately burnt, as near to the location was found a communique containing threats written by the International Conspiracy for Revenge, with references to events that had happened in different places around the country.

Translated Communique of the Action on 04/04 in Manado:

This attack is revenge for what the STATE and CAPITAL have done in: BIMA, TAKALAR & PANDANG RAYA (Makassar), KULON PROGO (Jogja), PERSIL IV (Medan), BUYAT, PAPUA and many other places.

We have become sick and tired of all the standard methods that are never listened to. Now, by a counter attack we make sure our voice is listened to - much louder!

We will burn and destroy more of their property that destroys life and all its beauty.

We will go further and with more force to avenge all their acts of stealing or imprisoning life's pleasures and desires.

It is already well understood that it is insufficient to just keep quiet and just let everything be mediated by specialists. That would be the same as the student activists and political parties that continue to dupe us with their empty promises.

There are no more reasons to remain passive and not to counter-attack. This is WAR!

War that we direct at all the forces of repression: bureaucrats, corporations, police and military institutions, law courts, prosecutors and lawyers and the mass media.

War on those who refuse to take up arms and take back their lives. Because tomorrow it will be much too late. It's now or never!! 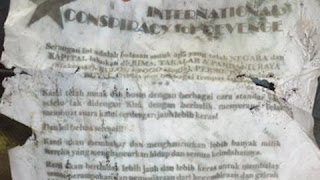 News of these actions, and also direct action around the world in solidarity with Indonesian struggles, is posted on http://indonesianintifada.wordpress.com
Posted by kassan at 6:55 AM