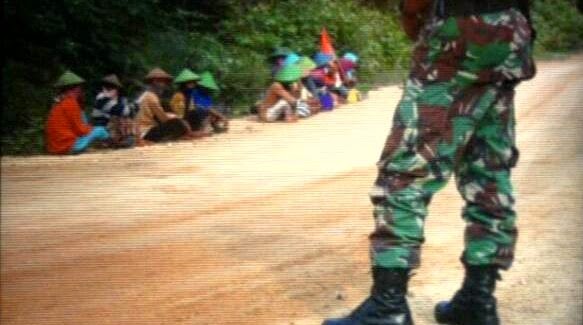 Tensions rose at an action by the local people of Rembang to resist a quarry and cement factory today, Monday 16th June 2014. Since the morning, at least three platoons of police, a company of military, and dozens of hired thugs had kept guard over the area where it was planned to lay the first stone of PT Semen Indonesia's proposed plant in Gunem subdistrict, Rendang, Central Java. A water cannon was ready to disperse the demonstrators who were had not agreed to the project, and all access points to the factory site were blocked by state security forces.

This action was a last resort after local people's voices had been gagged for so long, their struggle always met with intimidation, police and hired thugs responding with acts of repression time and time again. In this latest action, mostly by women and farmers, clashes were also unavoidable. Military were also sent in to search family members who were hiding at the road junction leading to the factory.

Several of the mothers involved in the action were injured or fainted, and other residents were also injured. However, the military blocked anyone trying to help the victims and prohibited a waiting ambulance from entering the area.

Four community members who were documenting the events were arrested and accused of being fake journalists,and were held in a police vehicle for several hours. Although they were eventually released, their cameras were confiscated.

It appeared that several journalists from different media organisations had received instructions from the cement company, so they didn't report this action. Meanwhile, friends who wanted to show their solidarity and try to document the action were forbidden to enter the area from the morning on. Searches continued to affect all efforts to document the action, everyone who was involved was made to show a press card.

Guarded by army and police, a truck full of worshippers was seen entering the factory site, said to be representatives of religious scholars affiliated with Nahdlatul Ulama, who were being brought in to say prayers as the first stone was laid. However, Nahdlatul Ulama members strongly criticised this tactic of creating inter-community conflict, as many local Nahdlatul Ulama leaders had already clearly stated their opposition to building a cement factory, as stated in their press release last May.

Until the afternoon, the people continued to occupy the junction leading to the factory site. They also carried out collective prayers whilst tightly encircled by security forces. Their plan was to spend the night in the area and the blockade would continue until their demands were met for all physical work on the factory to stop and the machinery removed from the area.

Let's show solidarity in any way we can.

Let's go to the area and help our brothers and sisters there. Let's report the truth about the repression. Let's spread the demand to cancel all cement quarries in the Kendeng mountains. You can also send text messages to the Central Java Provincial Governor Ganjar Pranowo (+62 811990931) and the Rembang police chief Kurniawan (+62 8131101199)

LATEST UPDATE (18.51 pm West Indonesia Time, Monday 16th June). A tent belonging to the Rembang people which is still standing near to the factory site is being trashed by police and military officers. Giving the reason that the police chief has given orders, the crowd, which is dominated by mothers, have been forbidden to bring light to the area. Food supplies have also been stopped.