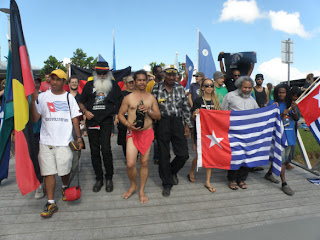 On June 1st in Melbourne, participants were issued “original nations” passports by members of the Kulan Nation and West Papuan visas by the Foreign Affairs Minister of the Federated Republic of West Papua, which declared independence in 2011. From the press release that day:

Genocide is being committed. Sovereignty has never been ceded.

The time has come for the original people of Sahul Land to come together as a combined force to demand the Australian and Indonesian government to acknowledge indigenous sovereignty and take practical steps towards the peace process.

Sahul land is a name for what is now known as Australia, the Torres Strait and Papua, which during previous ice ages were joined as one land mass.

"We were one people, we still are one people we must up hold our cultural connection, the old land is calling us." said Uncle Kevin Buzzacott, Arabunna Aboriginal Elder

The last two months, the Freedom Flotilla has been travelling overland from Lake Eyre to Cairns, stopping at sacred places, Aboriginal embassies and camps set up to resist forest destruction, to prepare for their mission. Now the two boats have set off and expect to arrive in the West Papuan city of Merauke in about two weeks, after stopping in the Torres Strait Islands and Papua New Guinea.

The Indonesian state has made threats against the boats, and has said it will mobilise the navy and air force to stop them reaching their destination. The Australian state has made it clear that it does not support the Flotilla. However the crew are not to be intimidated:

“We come in peace”, Uncle Kevin Buzzacott said on August 19th. “We are going to undertake a  peaceful ceremony celebrating the cultural connections and recognising the shared plight of  the indigenous peoples of our two countries”.

Meanwhile in Melbourne, indigenous activist Robby Thorpe explained why the Flotilla chose to bypass the Australian border regime and travel using aboriginal passports, which have been issued since the late 1980s as a reminder that indigenous nations have never ceded sovereignty.

He continued, “Who’s borders are these anyway? Why should we require the white man's documents to travel to West Papua? Our lands were once connected, our cultures entwined for thousands of years, we don’t need authority from Australia or Indonesia to do as we have always done. Aboriginal Passports are a real statement about our land, our identity, our lore. Australia and Indonesia can live the lie, but we the indigenous people don’t subscribe to that”

Updates and daily pogcasts from the Freedom Flotilla Website http://freedomflotillawestpapua.org
Posted by kassan at 10:32 PM