[For more background on the community of Kulon Progo, Yogyakarta, Indonesia and their resistance to the planned Iron Mine on their land see: http://jakarta.indymedia.org/newswire.php?story_id=2243
For a video from the news media, see http://www.metrotvnews.com/index.php/metromain/newsvideo/2009/10/20/92539/Bentrok-dengan-Polisi-5-Warga-Terluka-Serius ]

This morning (Monday, 20th October 2009), around 2000 coastal farmers connected to PPLP (Paguyuban Petani Lahan Pantai = Shoreline Farmers' Association), took to the street in front of the office of the mayor of Kulon Progo, in the town of Wates. Twenty-eight trucks full of farmers, who wanted to convey their wholehearted rejection of the planned project to mine iron sands, arrived to demonstrate at the public consultation event. They were in the mood for action, just as they had already carried out many times before.

Present at the public consultation were the mining company that instigated the project, PT. Jogja Magasa Iron (JMI) as well as government authorities, NGOs, village leaders and the public. Yet of the coastal inhabitants due to be affected by the project, at most 25 had been invited. What’s more, when they showed their invitations, several of them were refused entry to the meeting room. The committee claimed that their names did not appear in the guest book, despite the fact they held their invitations in their hands. There was a difficult conversation with the organising committee, because it was those people who were connected to PPLP that were being denied entry. Finally, only Supriyadi, the chair of PPLP, and a few others whose names were on the list managed to enter the glass building of the Kulon Progo Regency government. 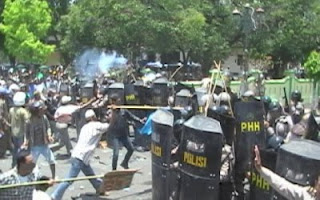 Meanwhile outside the building, thousands of farmers were continuing with speeches, unfurling banners and placards, and performing a theatrical action about farmers fighting mining companies and bureaucrats in their suits and ties. The security was tight, with around 600 riot police deployed, along with a water cannon. It was possible to trick the police, and the people were able to penetrate the front line of cops and ended up against the second line. Those who had been up close to the front line managed to shift and then move out of the way the iron bars that formed the police barrier. They then swapped this barrier for one of their own in the shape of a banner which read "Coastal Inhabitants of Kulon Progo declare their resistance to iron sand mining and exploitation of the environment, until the last drop of our blood".


Inside the building, Sutarman, the vice-chair of PPLP, interrupted the meeting which was being chaired by the vice-mayor of Kulon Progo, Mulyono. Sutarman read out the official statement of opinion from PPLP, in front of the General Director of PT. JMI, Philip Welten, the company's commisioners: GKR Pembayun, GBPH Joyokkususmo, KPH Condrokusumoo, KPH Ariyo Seno, Lutfi Hayder, as well as the others who were attending the meeting. The statement of opinion which he brought made clear that "this iron sands mining project has the potential to destroy the social fabric of our communities, destroy the environment and the self-sufficient economy of the inhabitants. Therefore those who live in the coastal zone, as members of the PPLP (Paguyuban Petani Lahan Pantai) community, press the central government of Indonesia, Yogjakarta Province,and Kulon Progo Regency to swiftly cancel the plan to mine iron ore from Kulon Progo's coastal fringe."

Sutarman also said that the Kulon Progo Regency Government and PT. JMI should move to outside the building and meet directly with the people gathered there, in order to truly understand the aspirations of the community. However, after the statement had been read, Vice-Mayor Mulyono, as moderator of the public meeting declared "If anything happens that disrupts this event from proceeding in an orderly or secure fashion, we will hand over responsibility to the chief of police and his ranks. As such, when ladies or gentlemen arrive in an orderly fashion, with or without an invitation, we invite them to calmly follow the proceedings. However if they disrupt the progress of this meeting of course we will hand over full responsibility to the police chief of Kulon Progo". This statement was judged to be too intimidating by Sutarman, and shortly afterwards 20 people connected to PPLP decided to leave the meeting. Supriyadi, the chair of PPLP made clear, "Our wish to enter and convey our aspirations has been blocked. The number of people affected inside is less than 20 percent. This event is not a public consultation forum, it is a forum to push through the environmental impact assessment of the iron ore mine."

At around 11am the sun was already bright, the people were starting to get hot, and so they gathered together in one block. One participant was able to make a speech from the loudspeaker vehicle, stating "it seems our blood is redder than that of the investors. Because they don't want to let loose their passions, while we are prepared to sacrifice ourselves for the sake of the environment". A moment later the farmers spontaneously started to move in towards the police barricade. Farmers began the attack, wanting to get to the various officials inside the building involved with the mining project. Speeches gave way to direct action, as the power of their initiative pushed through the line of police barricades.

Pushing started between the farmers and the police. The police were forced to move backwards by the strength of the peasant's action. This attack made the first line of police barricades retreat to behind the second, whose shields were taller. The police fought back by hitting the farmers from behind the first barricades which the farmers' action was at that moment pressing up against. The farmers withheld the attack to the best of their abilities, totally unarmed. Many younger farmers fought back with their bare hands, punching and kicking back at the police that were fully equipped with armoured uniforms, batons and shields. 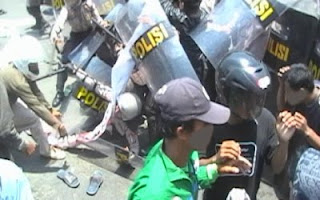 The sound of shots, like explosions, was swiftly heard and at the same time a spontaneous attack from farmers, throwing stones that they found by the railway line. The southernmost end of the field of battle was within reach of the railway. The constant and intense rain of stones could not be avoided. The police were fighting back, also using stones as well as shooting tear gas. Although the sound of three shots had already been heard, the farmers held strong, continuing to attack and defending the space they created, as the police retreated. According to Widodo, a field co-ordinator of PPLP, “Police shot the tear gas,aiming in front of me. The tear gas cannister was fired, and I only just managed to dodge it as it passed 50cm in front of my head”. Five separate explosions of tear gas being fired were heard. The farmers’ attack continued but then they chose to withdraw from the discomfort of the tear gas, gathering in the town square where their trucks were parked.

The water cannon let loose its load and managed to hit the protester’s loudspeaker vehicle. Although the mass of people was already some distance from the local government building, tear gas continued to be fired, reaching into the centre of the square where the people were gathered. A woman from Karang Wuni village who didn’t wish her name to be revealed said ”the police are trying to kill the farmers. Take a look, we are going to remember what happened today.”
Posted by kassan at 9:25 AM