The people of Bima are still in revolt after the brutal repression of the occupation of Sape port in December 2011 where several people were shot dead by police while taking part in an action against Arc Exploration, an Australian mining company. Although local government had said they would revoke the mining companies permit after the killings, local people continued to struggle for the permit to be cancelled permanently, and for all held in prison from last December to be freed. 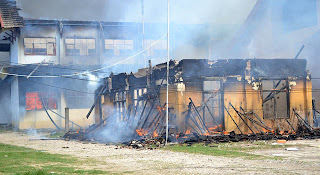 The Office of Bima's Bupati (the leader of the Bima regency) was burnt down during a protest on Thursday (26/1/2012). Tens of thousands of people from Lambu, Sape, Wera, Ambalawi and Langudu districts came to demand that Bupati Ferry Zulfikar permanantly cancel the mining permissions, and immediately set free the 35 people who were arrested during the repression of protests at Sape port in December 2011.

Riding in the back of 26 trucks, 68 pick-ups and 500 motorbikes, people thronged to Bima city. from the east. Tens of thousands of people arrived for the action, which had planned to occupy the Bupati's office and demand that Ferry Zulfikar sign a letter to cancel the mine permit. However the people's anger rose when their arrival was obstructed by the Pamong Praja police. The could also see that the office had been empty all morning because of the news that a huge action was going to happen. Feeling that their concerns were being ignored, the people battered down the door to the Bupati's office and forced their way in.

The anger that had been built up over years could not be held back any longer and just spilled out. The Bupati's office on Jalan Sukarno was burned down.
The action that Thursday was a follow-up to previous protests. In an action two days before, the people had blockaded the street and had given an ultimatum to the government and security forces to meet their demands, and remove the mining permit and set free the 35 residents of Lambu and Sape who were being held in prison.

In earlier blockades and protests, the people had given a five day deadline. The 24th of January was when the deadline for the government and security forces had been set to run out. After this limit was reached without their demands being met, it was time for the people to take action.

The protesters managed to pass a barbed wire fence that hd been set up. They swarmed into the office, turned over tables, chairs and other furniture, and threw it out of the windows. The office was finally set ablaze and the fire also spread to nearby buildings.

After the burning of the Bupati's office, the people left the location, moving towards the Raba prison, to free the 53 people who had been imprisoned there since the incidents at Sape port. The sheer numbers of people arriving at the prison demanding their friends' freedom made sure the prison guards did not move to intervene. The people had threatened that they would burn the prison down if their comrades were not released.