64 young people were arrested at a punk concert in Banda Aceh on Saturday December 11th. A few days later they were taken to a police training school, where their hair was ritually shaved, their clothes and possessions were taken from them, they were forced to pray, and the Acehnese authorities stated that they would be held for 10 days for 're-education'. Actions in support of the punks have taken place across Indonesia but also around the world as punk communities have responded to the news, after mainstream media outlets broadcast pictures of the mass detention.

What happened in Aceh?

After years of war and the devastation of the 2004 tsunami, a peace process was started which resulted in considerable autonomy for Indonesia's northernmost province. Former GAM fighters won the elections. One of the changes they brought in was a form of Islamic Syaria'h law, which is not enforced in any other part of Indonesia. Currently Aceh is in the run-up to new elections and different candidates are pitching their image to the public.

In nearly all parts of Indonesia there is a large punk scene. Many young homeless kids are attracted by the music and the lifestyle and can support each other in many ways, forming a subcultural community. Indonesian punks often earn a living by busking on buses or at traffic lights, and travel the country for free, hitch-hiking on the back of trucks. But at concerts, which are usually free or cheap and organised according to DIY ethics, people from all backgrounds come along.

The concert on 10th December 2011 was a benefit gig to raise money for orphans. Apparently the event started at about 3pm and it was supposed to continue into the night. but at 21.30, police climbed onto the stage and demanded that the event should finish. The people there tried to negotiate for the gig to continue, but the cops didn't seem to care. Reacting to the cops' behaviour, the punks started singing a popular resistance song, Darah Juang (blood of struggle), but as it happened, that song seemed to provoke the anger of the cops who then started beating people and arresting them.

The arrested punks were taken to the Seulawah National Police School one hour from Banda Aceh city. That's where their hair was shaved off and they were forced into the lake. Punks in Aceh who weren't arrested have found it difficult to get any communication with their friends, because it seems they are in isolation.

Jakarta 17th December:
"Reacting to the repression in Aceh where 64 punks were arrested by Sharia'h police, various punk groups from around Jakarta came together for a solidarity action with one demand: Full freedom for the 64 detained Aceh punks.

The target of the action was the Provincial Government of Nanggroe Aceh Darusalam representative's building, and then finally at the Hotel Indonesia traffic circle. The action started from Ismail Marzuki Park in front of the Jakarta Institute for the Arts (IKJ).

At the HI traffic circle, several people cut their hair into a mohawk as an act of solidarity and a protest at the state's coercive attitude in repressing the arrested.

We proclaim our full solidarity and encourage everyone, whether a punk or a sympathiser to get out and show your own solidarity. Let the people who are behind the iron bars know that they will never be alone.”

(translated from negasi blog)
Jakarta- 19th December
"Solidarity actions against the arbitrary arrest of 64 punks and their detention labelled as reeducation by Aceh's sharia'h police have taken place in Jakarta once again. This time the target was the Indonesian Police headquaters (Mabes Polri) located at 3 Jalan Trunojoyo, south Jakarta. Around 100 people from various places joined this action to “Save the Aceh Punks” 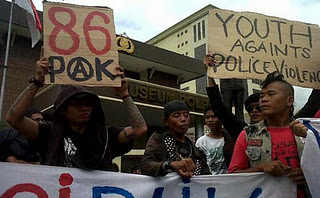 In Makassar, Sulawesi, about 100 punks gathered at an abandoned department store on Monday afternoon (19th December) to prepare for a demonstration which took place two days later.

Moscow:
“On December the 15th a group of anonymous punks from Moscow decided to act upon receiving news of brutal state repression of Indonesian punk-scene. We consider ourselves anarcho-punks and these news offended us in the deepest sense. We wont tolerate any religion to hold sway over living being’s freedom, especially over our subculture. Thus on the same evening we gathered to express our rage. We chose Indonesian embassy as our target. For us solidarity starts on subcultural level. We feel that modern Russian anarchists pay too little attention to subcultures of resistance. We wish the news of our action to reach Indonesian comrades. We hope they will have their spirits soar after hearing that in such far-away country there are folks who feel solidarity with their struggle.
Punk is not a crime. Religion is fascism. Fight for your looks.”

(from act for freedom now) 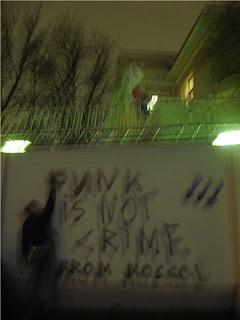 In London there was a demonstration outside the Indonesian embassy with 25+ people showing up. 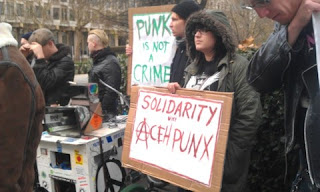 In the United States there have been actions at the consulates in San Fransisco and Los Angeles. 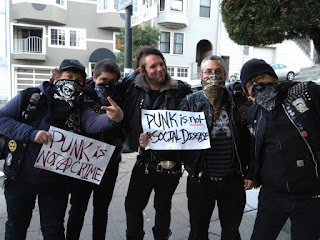 Even in China, punks are collecting mixtapes to send over to Aceh when the punks get out.