Each Indonesian Independence day, 17th August, a number of prisoners are granted remission as part of the celebrations. This year, the list included high-profile Papuan political prisoners Buchtar Tabuni and Filep Karma. This is a highly provocative act to Papuan activists, who equate the Indonesian presence in their land with continued repression.

Buchtar Tabuni was released from Abepura prison on August 17 in Jayapura, West Papua. He had been imprisoned after taking part in a peaceful demonstration in October 2008 supporting the launch of the International Parliamentarians for West Papua (IPWP) in the UK Parliament.

From Bintang Papua, 17 August 2011 [Abridged in translation by TAPOL]:

Sentani: Buchtar Tabuni, the chairman of KNPB, the West Papua National Committee was one of 656 prisoners in Papua to receive remission of his sentence, granted to prisoners on the occasion of the anniversary of Indonesia's independence on 17 August 1945.

While other prisoners were eagerly awaiting news of something they have been waiting for for a very long time, Buchtar said he regarded his remission as an 'insult' for the people of West Papua.

The remission of three months meant that his incarceration has come to an end.

Speaking to his many supporters who were there to welcome him at the prison gate, Buchtar said that he does not recognised this independence day because 'our ancestors never fought for an Indonesian government but fought for the Melanesian people.'

He said that the remission was merely an attempt by the Indonesian government to improve its reputation on the international stage.

'They think that with my release on this day, it means that I will show my love and affection for Indonesia, but that is not so. I will continue my struggle for this nation even more radically than before,' he said, to the cheers of his supporters.

He used the occasion to congratulate the Indonesian government on the anniversary, and went on to ask the government to give its support to the Papuan people who are yearning for their independence.

Following his release, Buchtar was accompanied on his way home by scores of his supporters. The convoy of vehicles accompanying him on his way home in Sentani caused serious traffic congestion but the situation remained calm. 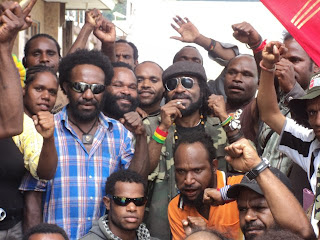 Filep Karma was arrested during a Morning Star flag rising on December 1, 2004. He is currently serving a 15 year sentence in Abepura Prison, Jayapura. He has refused remission for the second year running. He gave the following statement (watch the original in Indonesian at http://westpapuamedia.info/2011/08/20/filep-karma-refuses-indonesias-remission/)

“I've been saying since last year that I refuse remission. But the Indonesian government keeps on offering remission until now. So I want to state that I refuse remission for this year. Remission is of no use to me: only to be set free directly, without conditions, and the Indonesian government smust beg the forgiveness of the Papuan people for their unjust behaviour towards Papuans and return them their sovereignity .[ ... ] The government should ask for the forgiveness of all Papuans, who have been killed, or oppressed, or who have had their land taken from them. Only then will I accept being freed.” 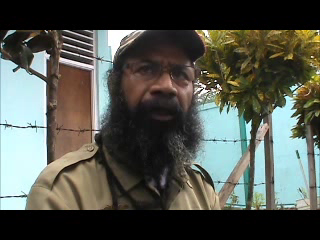