The Fire of Resistance Burns Bright in Polongbangkeng.


On a small hill beneath a big tree, dozens of people have been waiting since morning. Their look is serious as they observe from afar and wait to see what will happen.

Their attention is focussed on Block D of state plantation company PT Perkebunan Nusantara PTPN XIV, at a distance of around 200 meters from the tree. That particular piece of land was seized from its owners, the community of Polongbangkeng, Takelar, South Sulawesi, 28 years ago, and they are still trying to take it back.

“If they try to work the land, we will block them”, explains a farmer who was participating in the watch last Saturday (13/11). Using his machete, he points out various places, to the west, south-east and south. At each of these points there are also other teams of people, keeping lookout from different angles. Guerrilla tactics in practice. 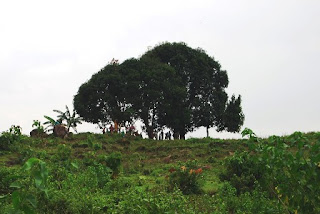 The background to all this is a struggle which is intensifying once more. Nearly every day the people of Polongbangkeng, Takalar take action to obstruct the company working the land. The people do not believe that the company will stick to the agreement that they made. During a process of mediation towards the end of last year, both parties agreed that they wouldn’t try to work the land in the disputed area until the problem was resolved. But it seems that PTPN XIV act like they are free to use the land even though they are bound by the agreement. When they go to work on the land, they even have the protection of the armed force of South Sulawesi Brimob, a military style police force.

The people’s direct action, coming to the conflict location and making sure the company’s efforts fail shows that their struggle for control of their own lives is still alight in Polongbangkeng. When the company tries to carry out work, crowds of people from the various villages will come to that point. Solidarity arrives from each village straight to the place where the company wishes to work. They are divided into several small teams and use telecommunications equipment to co-ordinate with one another and plan actions together.
Ardi, a local resident who got in touch with us, told us that these repeated actions are making PTPN XIV more aggressive. This directly provokes a strong response from the farmers.

A week before, the condition was getting more intense. “A farmer named Dg. Tamma, obstructed the guards and workers by placing his head under a tractor. He was prepared to be crushed by the vehicle”, Ardi explained. But the police were not brave enough to take the risk and Dg. Tamma was pulled from under the tractor and brought away from the location.

Dg. Tamma actually didn’t have any other choice, the cassava that he planted  was being destroyed by PTPN to be replaces with sugar cane. “But that cassava would be ready to be harvested in two months time,” Arif made clear. His anger was transformed into radical action, using his body as a living blockade. The company’s tractor was also forced to stop.

"A few days ago, Brimob also shot at the community. Unfortunatly no reporter covered it”, our farmer friend told us. One moment later, he asked “Or are they only brave enough to shoot when there are no outsiders present?”. 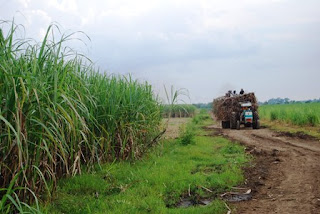 That day, after nearly two hours waiting, the people are convinced that there was no work going on. We decide to return to the house of one of the community, where we had all met up before. On the way back, we pass a small hill where a police car was parked. It turned out that nearby Brimob troops could be seen sitting down, on alert. But it is not clear why they were not guarding the company’s workers and its tractors.

In the review and analysis which we published quite some time ago, it was increasingly evident that competition and industrial expansion require sacrifice – in this case the people of Polongbangkeng, playing their part in ensuring endless growth. The domestic bourgois agenda takes care to ensure that the sugar industry will still fit with capitalist logic.

Syarul says that to optimize the sugar industry in this area he will resolve conflicts that are connected with sugar production. One of the targetted factories is the Takalar Sugar Factory operated by PTPN XIV. But this is also a signal to all farmers in areas where PTPN operates.

To this end, the bourgiosie and bureaucrats choose to plant commodities that reflect their own business interests, rather than the needs of the local people affected. As it is currently the rainy season, the farmers of Polongbangkeng should really be rushing to plant their crops. That is their security and the livelihood of them and their families. 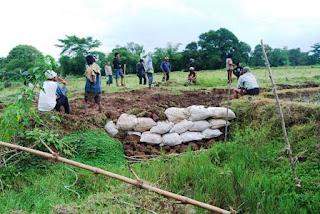 SUNDAY LUNCHTIME (18/11) the next day, rain could not stop the plans of the community to carry out their action of blockading work and sabotaging production.

From the house of one of the community we set out to another location, different from the day before. A group of people start to dig and pile up clods of earth using hoes and other simple tools. They fill plastic sacks with earth to become an embankment. They sabotage the ditch which PTPN has built in the middle of the people’s land. This action was meant as a response to PTPN digging up the people’s freshly-planted rice fields some time before.

The sabotage was carried out to stop water draining the ditch. The ditch is intended to regulate the water supply to pools inside the sugar cane fields. If the ditch doesn’t work, water will not flow out and stay in the fields causing the sugar cane to rot. According to information from local people, the ditch had been built last February 2010, encircling the people’s land in the shape of the letters V and U. 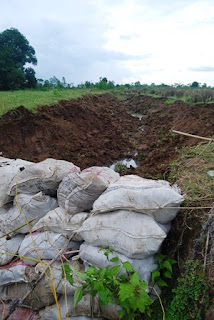 Farmers who refuse their land to be used as drainage for the sugar cane plantation have already protested many times to the police and company. They refuse to let ditches be built across the people’s land. But the response they get is not satisfactory. So they resort to other forms of protest such as filling in the ditches

After half a day, we receive news that in Block D work is about to start. Various people immediately set about contacting the others to go to the point in question. We also make a move, together with some people who have arrived to pick us up.

After passing a small stream and small dike which the rain had turned into mud, we meet with some other people who have arrived with the same purpose.

From afar we see a company tractor that has just finished working over a section of land. This time however, there is no tight security like there had been a few days before. As the crowd of people approaches, the driver of the tractor seems a little tense. Some of the people speed up their stride.  Whether through fear of seeing so many people arrive, or because he had already decided that it was time to go home, the driver turned around and drove off into the distance.

Several people who discover the land freshly dug over cannot hide their fury. The company has taken advantage of the rain when the people weren’t in the area. 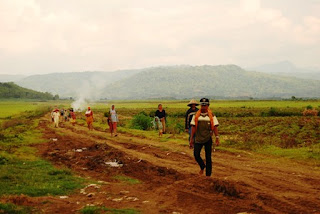 From their different vantage points, the small teams are also on alert. As on the day before, they keep a look out from various directions and communicate via mobile phone. If there are signs of work or security, they will besiege the area immediately.

However, after more than an hour waiting it looks as if no more work will take place today. Finally, after some mobile phone calls, a decision is taken to gather at Block D. Within a few minutes, groups of people can be seen arriving from the various directions in which they have been waiting ready.

We should take note that work being canceled did not make the people happy, instead they were disappointed and angry. This is because they know that the company will not go to work if the people are blockading and outsiders such as journalists are present. Actually the people themselves honestly want confrontations with tractors and the Brimob guards. The reason for this is that which they most fear is that PTPN XIV will carry out work at night, as they have been doing more and more recently.

Finally when all the teams have gathered at the site, the people proceed to discuss the situation that just occurred. They throw about various arguments for what should be done. The people then divide into three groups based on the strategies suggested.

First of all, there are those that wish to make a big action at the office of the Bupati (Regency chief) or Comission I of the Takalar local council. Their reasoning is that those who hold power should be pushed into doing something which is on the side of the people.

The second group are in favour of continuing the blockading actions. They suggest that blockades shouldn’t only happen in the daytime, but also at night. This is because PTPN is tending to work more at night if they are being blockaded in the daytime.

Meanwhile the third group suggests a different tactic. Their idea is to occupy the land, creating temporary villages to keep the company off the land so they cannot carry out any work at all. In this plan the people would stay on the land and observe the situation as well as defending their land.

Without being aware, everyone there at that moment was involved in the discussion in quite a special atmosphere. Almost 50 people were taking part. This is an unusual sight, where ordinary farmers discuss the strategies and tactics that they each wish to see. Their discussions take place without representation or the moderation of a leader. From their dialogue, a picture is formed of participation that is more or less equal, ordinary people discussing, distant from the tumultuous culture of competing personalities. It is a special atmosphere which calls to mind the spontaneous actions of last year 2009, that sprang from this same dynamic. It is an expression of that which had existed before a mediation process was imposed on the community by external actors.

During one hour of exchanging different points of view, the discussion had not reached a point at which a decision could be taken. The people also were aware that they should also seek the involvement of those who were not present at that moment, if they wanted to do a joint action in the name of all farmers of Polongbangkeng.

In the end, one of the people suggested that the conversation should continue that night at the people’s main co-ordination post for the struggle. I didn’t know whether a formal meeting at night would be as egalitarian as that which just happened. I also didn’t know whether every person could exchange their views and desires in such a free and relaxed way as in the afternoon. Would the discussion be free from some people dominating the others.

The daylight started to flee. We were told that we should leave that place as soon as possible because the river’s current was rising. And so in the end all returned to their homes, departing from that place still with their


-translated from http://kontinum.org
Posted by kassan at 11:00 PM